Local Events, The Best of Connecticut, The Best Of... by savorysweeteatsOctober 20, 2013

In case you aren’t familiar with this premier Connecticut culinary competition, Chowdafest is a fundraiser for the CT Food Bank held each year on the Super Bowl at Webster Bank Arena at Harbor Yard in Bridgeport. For $10 YOU get to be the judge at Chowdafest by rating each soup in a scale from 7 to 10 with 1/2 point increments. The soup with the highest score in each category wins. This year’s Chowdafest will be held on Sunday, February 2, 2014 from 11am-3pm.

Why do I like Chowdafest so much? Well, it’s a fundraiser for the CT Food Bank after the holidays when they need it the most, we get to eat chowder and soup from 28 local competing restaurants and chefs for $10, and this is “a zero waste event with all materials being compostable.”

Chowdafest is limited to 28 restaurants with seven spots in each of the four categories:

First, second, and third place restaurants for each of the four categories in the 2013 Chowdafest automatically qualify to compete again this year. Also, one spot in each category is reserved for “at-large” bids by the Chowdafest committee, which leave 12 open spots.

So who gets to compete in the remaining spots?

That’s where Chowda Quest comes in!

How do you vote? There’s an app for that!

That’s right, Chowda Quest has its own free app that you can very easily download and use to vote! 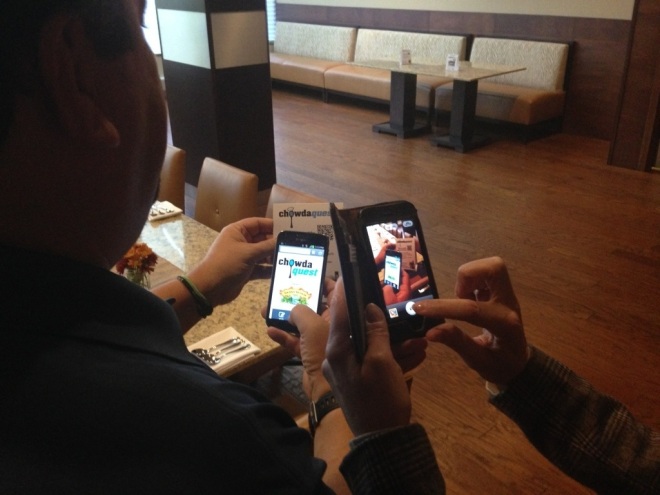 This photo is of Jim Keenan, Chowdafest Event Chairperson, showing us how easy it is to download the Chowda Quest app and vote for your favorite!

There are currently more than 60 Connecticut restaurants already competing in Chowda Quest or considering competing. As the Chowdafest event chairperson Jim Keenan said, “Chowdafest has become a statewide event. We’re excited to see restaurants from Stamford to Mystic involved. Great restaurants from New Haven and Hartford areas, too.”

Why do local chefs and restaurants like Chowda Quest?

Casey Dohme, restaurant manager of Ginger Man in Norwalk, explains: “Participating in ChowdaQuest allows us to test three new soups we’re considering and the voting feedback will help tell us what customers like the best.” Ginger Man has announced that they will be retiring their award winning sweet potato soup and entering something new this year.

These following restaurants are all participating in Chowda Quest:

Chowda Quest is sponsored by CTBites.com and Sierra Nevada Beer. Sierra Beer will also the exclusive beer at Chowdafest 2014 and will offer beer samplings.